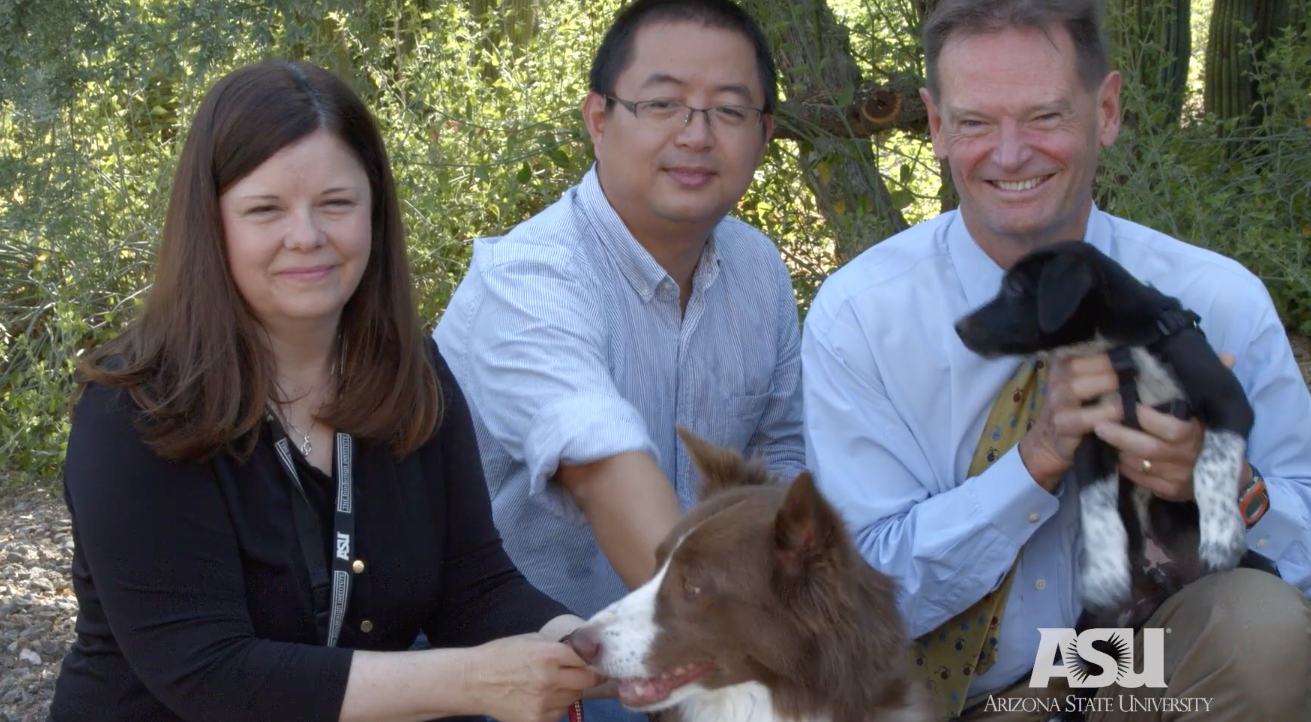 For more than a decade, scientist Stephen Albert Johnston and his team at Arizona State University’s Biodesign Institute have pooled their energies into an often scoffed-at, high-risk, high-reward goal in medicine: to develop a universal vaccine to prevent cancer.

In 2018, The Open Philanthropy Project awarded a multi-year grant of $6,421,402 to Stephen Albert Johnston at Arizona State University to support the largest interventional canine clinical trial ever conducted. The trial that began in 2019 will assess the effectiveness of a unique vaccine in preventing any type of cancer in dogs.

The mind-set is simple, according to Johnston: Treat cancer just like an infectious disease. So when his team looked deep within tumors, their research gold was discovering 200,000 cancer neoantigens, the components of cancer vaccines, that had been missed by others. They also found that enough of these neoantigens occurred repeatedly in different tumors that it might be possible to make one vaccine for all tumors.

5-year study to examine any beneficial effects on 800 dogs 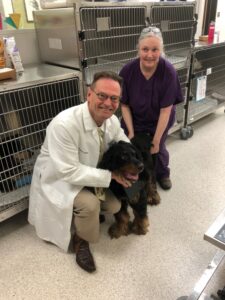 Meet Trilly: The black-and-tan, floppy-eared, 9-year-old Gordon setter may have just made medical history by receiving a shot that may contain the very first vaccine intended to prevent cancer.

“First one. We did it!” said Arizona State University scientist Stephen Johnston, a professor in the School of Life Sciences and director of the Biodesign Center for Innovations in Medicine.

For Johnston, the moment was the culmination of a 12-year, high-risk, high-reward quest to reshape the way we approach treating cancer, by preventing cancer before it can start. “If this can work in dogs — and that’s a big if — then we believe it can work in people too,” said Johnston, who developed the vaccine with his team at the ASU Biodesign Institute’s Center for Innovations in Medicine.

That’s because, just as in people, cancer is the No. 1 cause of illness and death in older dogs. One out of every three dogs are affected by cancer, and 6 million new canine cancer cases are diagnosed every year.

With her owner Caroline Randy by her side, Trilly received her vaccine shot at the University of Wisconsin-Madison School of Veterinary Medicine, which is participating in the Vaccination Against Canine Cancer study. Next in line was Norton, a 9-year-old rat terrier mix.

As part of the study, the dogs were given either a vaccine or placebo (neither the dog owners nor the scientists know which) and will be monitored during the study. More than 800 dogs will be enrolled, making it the largest clinical trial conducted to date for canine cancer. The study was made possible by a $6 million grant Johnston received from the Open Philanthropy Project. The UW School of Veterinary Medicine is one of three participating institutions, along with Colorado State University and University of California, Davis.

“We’re testing a totally novel way of creating an anticancer immune response,” said David Vail, a professor and board-certified oncologist at the UW School of Veterinary Medicine. “The holy grail would be to prevent cancer as opposed to waiting for it to start and then treating it.”

The anticancer vaccine being tested is made up of a proprietary cocktail developed by Johnston’s ASU team that targets approximately 30 abnormal proteins found on the surface of cancer cells. These proteins, a result of improperly coded RNA — so-called frame-shift mutations — are generally only found in patients with cancer (in both dogs and people).

By injecting this cluster of proteins into healthy patients, along with a substance that stimulates an immune response, researchers believe the vaccine could serve as a universal defender against cancer by “turning on” the immune system to recognize and defeat cancer.

The vaccine can target several cancers common to dogs, including lymphoma, a cancer of the lymphatic system; osteosarcoma, or bone cancer; hemangiosarcoma, a deadly cancer that originates in the blood vessels and is almost exclusive to dogs; and mastocytomas, or mast cell tumors.

The trial is slated to run over five years. Cancer-free, healthy dogs between the ages of 6 and 10 will be randomized to receive either a series of the investigational vaccine or placebo vaccines. Healthy, middle-aged pet dogs will be enrolled, continuing to live their normal lives at home and receiving biannual exams with a complete clinical pathology workup.

Dogs will be randomly chosen to receive either the vaccine or a mock version. Dogs receiving the mock vaccine are expected to develop cancer at normal rates. The experiment will determine whether the test vaccine can prevent cancers.

Two sets of vaccines will be given every two weeks, for a total of four treatments, and then annually. Researchers have not observed any side effects other than those typical to any vaccine in mice or dogs to date, such as moderate local pain or swelling at the site of injection, but the study will characterize any unanticipated adverse reactions in the larger study population.

Participating dogs will live at home and be checked two to three times yearly for five years after enrollment to monitor them for the development of any cancers. “We should know as soon as two years from now whether or not we see the vaccine is having an effect,” said Johnston.

Their medical care will be covered by the study, through funding by the grant from Open Philanthropy. It is also supported by Calviri Inc., a company Johnston started to commercialize the vaccine if it is effective.

If the trial is successful, Johnston’s company, Calviri, plans to create a cancer vaccine for humans. Johnston said they have the technology to make the human vaccine right now, but even optimistically it would be five to 10 years before human use.

“This is probably the only approach to this type of vaccine, so we feel we have to try it,” said Johnston. “The implications of success would be quite large — for dogs and people.”