Fighting Against Weapons of Mass Destruction

The ASU team, led by Joshua LaBaer, executive director of the Biodesign Institute and director of the Center for Personalized Diagnostics, and co-principal investigator Vel Murugan, aims to develop a technology that will use a single drop of blood to quickly read a person’s epigenetic “fingerprint.” The fingerprint will identify signatures that indicate if the individual has ever been exposed to materials associated with producing weapons of mass destruction.

to create epigenetic tool for fight against weapons of mass destruction

In 2019, Arizona State University was selected by the U.S. Defense Advanced Research Projects Agency (DARPA) to build a field-deployable, point-of-care device that will determine in 30 minutes or less if a person has been exposed to weapons of mass destruction or their precursors. The DARPA award, worth up to $38.8 million over four years in phases and options, will build on the university’s growing capabilities in developing molecular diagnostics for applications in defense and human health.

The device will be capable of detecting the health effects of a number of substances associated with weapons of mass destruction, including biological agents, radiation, chemicals and explosives.

Arizona State University has been selected to participate in DARPA’s Epigenetic CHaracterization and Observation (ECHO) program. According to DARPA, the “ECHO program has two primary challenges: to identify and discriminate epigenetic signatures created by exposure to threat agents; and to create technology that performs highly specific forensic and diagnostic analyses to reveal the exact type and time of exposure.” (Epigenetic changes are chemical modifications that affect genes, altering their expression while leaving the genetic code intact. Epigenetic changes can occur as natural responses to the environment but can also signal exposure to toxic agents or disease pathogens.)

Epigenetics is coming into its own in the 21st century. DARPA describes the epigenome as “biology’s record keeper,” explaining that “though DNA does not change over a single lifetime, a person’s environment may leave marks on the DNA that modify how that individual’s genes are expressed. This is one way that people can adapt and survive in changing conditions, and the epigenome is the combination of all of these modifications. Though modifications can register within seconds to minutes, they imprint the epigenome for decades, leaving a time-stamped biography of an individual’s exposures that is difficult to deliberately alter.”

“ASU has long been committed to working across disciplines, often in tandem with corporate partners and government entities, to identify, address and solve global grand challenges. We’re proud to utilize our innovative approaches to advance our military’s capability in this critical capacity. Warfighting technology of the future will increasingly rely on the ability to rapidly develop and deploy highly integrated, responsive technologies like the ECHO project. Much like ASU, DARPA is committed to making strategic investments in breakthrough technologies. This partnership to advance our country’s national security priorities is a direct reflection of that shared vision.”

The technology under development may eventually enable simple, low-cost monitoring of epigenetic changes, which could be used as a powerful diagnostic method to detect a broad range of human diseases.

The new Translational Center for Molecular Diagnostics within ASU’s Biodesign Virginia G. Piper Center for Personalized Diagnostics brings together a proven team that includes molecular assay development, bioinformatics, machine learning, bio-signature identification and automated assay development. ASU’s approach engages experts both within ASU and externally to leverage maturing technologies that are ready to make an impact in the field.

While available technologies can identify the physical presence of weapons of mass destruction and chemical precursors, current techniques for determining the source of life-threatening substances have proven unsatisfactory at identifying people engaged in the production of toxic agents. The ECHO program assesses the impacts of exposure on the human body. This epigenetic signature provides a persistent indicator of historical exposures. 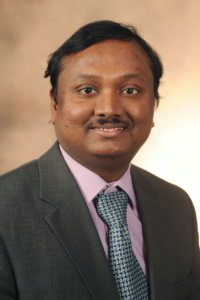 “The molecular diagnostics team at the Biodesign Institute is impassioned and driven by the idea that our work will save lives,” said Vel Murugan, co-principal investigator for ASU’s DEPICT team.
(Photo courtesy of ASU)

The ASU team, led by Joshua LaBaer, executive director of the Biodesign Institute and director of the Center for Personalized Diagnostics, and co-principal investigator Vel Murugan, aims to develop a technology that will use a single drop of blood to quickly read a person’s epigenetic “fingerprint.” The fingerprint will identify signatures that indicate if the individual has been exposed to materials associated with producing weapons of mass destruction.

The ASU project will be known as DEPICT– Diagnostic Epigenetics of Infectious agents and Chemical Toxicity. During the project, researchers will apply novel approaches to identify changes in global epigenetic signatures and implement unique bioinformatics and machine learning tools to identify epigenetic biomarkers that will quickly and accurately reveal the nature and severity of exposures.

In keeping with their high-risk, high-reward approach to innovation, DARPA envisions the same technology being used to rapidly diagnose patients and troops who may have been exposed to threat agents, or who may be suffering from infections.

“ECHO technology could open up new sources of forensic evidence and make battlefield collection of evidence safer, more efficient, and more accurate,” Eric Van Gieson, ECHO program manager, said in DARPA’s original announcement of the program. “Additionally, by making it possible to deploy an analytical capability to vastly more locations, we would enhance our ability to conduct global, near-real-time surveillance of emerging threats.”

According to LaBaer, this project builds on the team’s previous success with a $36 million Biomedical Advanced Research and Development Authority (BARDA) project during which his team created a bio-dosimeter that can detect the level of exposure to an unanticipated radiologic or nuclear event. ASU’s prior experience in assay development and translation to industry will be fundamental to the development of this new platform.

“Imagine U.S. intelligence has identified a WMD threat and a suspect, but needs a way to quickly verify if the suspect is the perpetrator,” said LaBaer. “The current approach just isn’t effective. Medical personnel would identify traces of biological or chemical agents on the suspect’s clothing or hair, a slow and unreliable process requiring lab analysis. Now, consider the same situation in which the agent in the field can obtain a small blood sample and check epigenetic markers in real time to begin piecing together evidence.”

Co-principal investigator Murugan said the molecular diagnostics team at the Biodesign Institute is driven by the idea that their work will save lives.

“We continue to work with institutions across the U.S. and our partners around the world, to develop technologies that will protect our warfighters, as well as our fellow citizens,” said Murugan. “The assays and platform that we will develop have the potential to become useful beyond detecting WMD exposures – ultimately, leading to a non-invasive diagnostic test for chronic illnesses such as cancer, diabetes and heart diseases.”

As envisioned by DARPA, the ECHO diagnostic platform could meet the needs of many organizations, including Special Operations Command , Biomedical Advanced Research and Development Authority, U.S. Army Medical Research and Materiel Command, and Joint Program Executive Office for Chemical and Biological Defense.

This project has been funded in whole or in part with federal funds from the U.S. Army Research Office and Defense Advanced Research Projects Agency. Under Contract No. W911NF-19-C-0039. (ECHO, HR001118S0023)

About the Biodesign Institute at Arizona State University