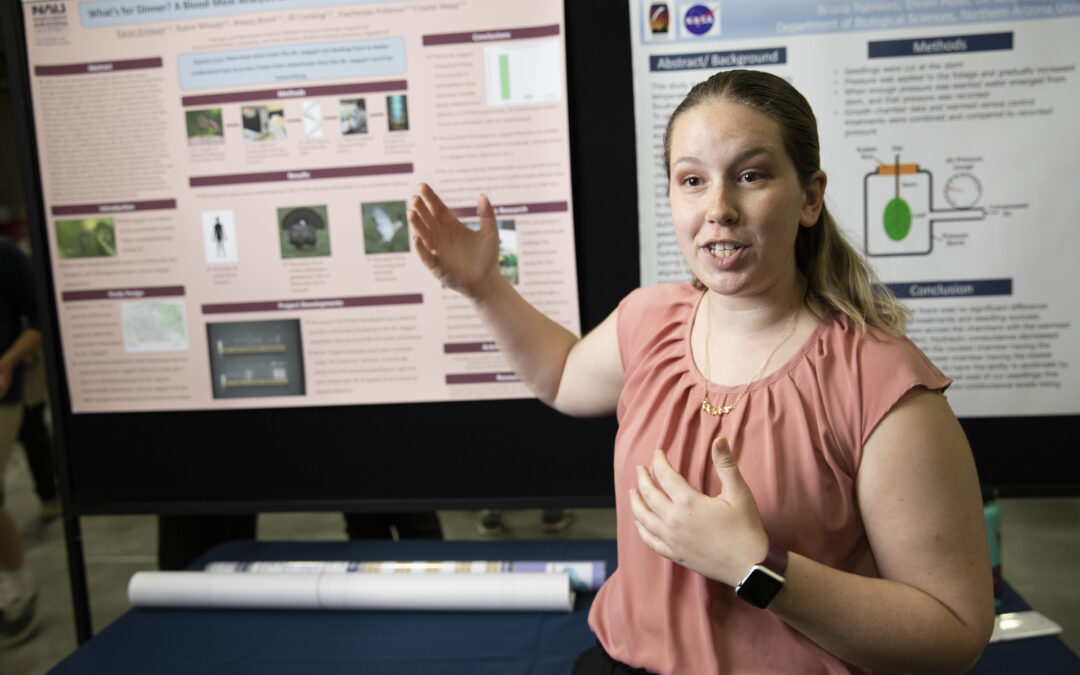 Despite the fact that Daryn Erickson’s research regularly involves making what she refers to as “mosquito smoothies”—preparing mosquito samples in the blender for testing–she loves her work. Daryn has been working at NAU’s Pathogen and Microbiome Institute (PMI) for two years testing mosquitoes for the viruses that cause West Nile, Zika and dengue fever.

Erickson, who is majoring in microbiology and minoring in chemistry, will graduate in December. When she began her research, she worked with assistant professor Crystal Heppto test Culex mosquitoes to identify the different strains of West Nile circulating in the Southwest.

“I broke off from the larger West Nile virus project about a year ago to start studying a different mosquito—Aedes aegypti—that does not transmit West Nile virus,” Erickson said. “I wanted to see if these mosquitoes are currently transmitting or even just carrying viruses such as Zika or dengue fever. They aren’t, but we did identify a new insect-specific virus—one that does not infect humans. We wonder if this virus could prevent viruses like Zika and dengue from infecting Aedes aegypti.”

The mosquitoes Erickson studies are collected from traps in Maricopa County and taken to a lab in Phoenix. After being separated by species and by sex—because only the females feed on blood, they are the ones that can spread disease—the samples are shipped to NAU.

Erickson’s research enables her to explore her enthusiasm for viruses. “I love the fact that viruses are, in my opinion, more complex than bacteria in a lot of ways,” she said. “The virus lifecycle is really fascinating to me.”

After graduating, Erickson will work at PMI through the spring semester, and will follow her aspirations by applying to NAU’s Interdisciplinary Health Ph.D. program in the fall so she can continue her research with mosquitoes. She said her research work has helped her grow both academically and personally.

“It’s been an amazing experience,” she said. “I’ve grown a lot and improved my problem-solving skills, having to troubleshoot different experiments. I’ve also grown by developing my leadership skills. My research work has made me into a more independent person, but also able to lead a group of people.”

Erickson said her mentors, Hepp and assistant professor Viacheslav Fofanov, created a “real family-like lab group. They were always there to talk to me and help me out with anything. And they’ve also helped me decide where I want to go in my career and what kind of a path I want to take to further my education.”