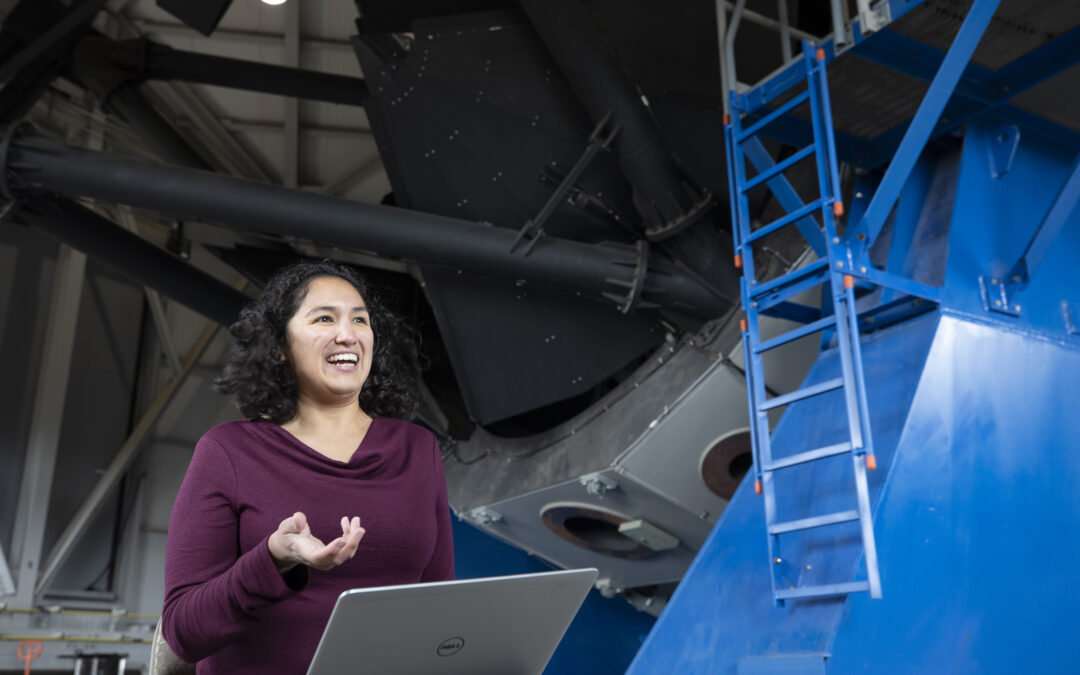 Scientists have discovered nearly all “extinction-scale” Near-Earth Objects, or NEOs (asteroids larger than 1 kilometer in diameter) and determined they pose no risk of impact in the near future. But there are still thousands of smaller NEOs that pose a potential danger.

NASA’s Planetary Defense Coordination Office (PDCO) coordinates the detection of potentially hazardous objects, characterization of those objects and response planning in the event of an actual impact threat. Michael Kelley, program scientist with PDCO, and Vishnu Reddy of the University of Arizona’s Lunar and Planetary Laboratory, led an international team of astronomers in 2017 to successfully complete the first observational campaign using a real asteroid to test global response capabilities.

NAU assistant professor Cristina Thomas was one of 69 scientists from around the world collaborating on the project. A planetary astronomer, Thomas co-authored a paper recently published in Icarus summarizing the exercise and its scientific results.

The 2012 TC4 asteroid, estimated to be 50 feet long and 25 feet wide, was expected to approach Earth’s orbit in October 2017. In the months leading up to its approach, astronomers from the U.S., Canada, Colombia, Germany, Israel, Italy, Japan, the Netherlands, Russia, South Korea and South Africa tracked TC4 from both ground- and space-based telescopes to study the asteroid’s orbit, shape, rotation period and composition.

As TC4 safely passed Earth on October 12 at a distance of only about 50,000 kilometers, or 31,000 miles, above Earth’s surface, astronomers observed the object using telescopes all over the world, including the Discovery Channel Telescope in Happy Jack, Arizona. NAU professor David Trilling and graduate student Annika Gustafsson also contributed observations and are listed on the paper. After the asteroid’s flyby, Thomas coordinated the results of the spectroscopy observations, which were used to determine the asteroid’s composition. Thomas also did some observing for the lightcurve component of the campaign.

“My lightcurve observations were done using the four-meter Southern Astrophysical Research (SOAR) telescope on Cerro Pachon in Chile. The observatory gave us a small part of their engineering time on the telescope because of the importance of the program,” Thomas said. “The goal of the lightcurve observations was to determine how fast the object was rotating and whether the rotation period was around a single rotation axis (like the Earth), or if it was what is called ‘tumbling’.”

Worldwide coordination on project a success

“Scientifically, there were no incredibly surprising findings,” Thomas said. “The object was certainly within the realm of what we can expect from a near-Earth asteroid. In my opinion, the most interesting part of this work was the worldwide coordination and how well each of the different groups worked together. Each group of observers used the information provided by other groups to help construct a more complete picture of 2012 TC4. This even extended to the inclusion of the compositional results into studies of what might happen if an object like 2012 TC4 were to impact the planet. Getting this amount of detail on an object that was only bright enough for careful study for a short period of time is truly a group effort.”

What’s next for international asteroid-watchers?

Thomas and many of the other scientists on the TC4 campaign, along with members of the International Asteroid Warning Network (IAWN), are working on the next NASA campaign to characterize the near-Earth asteroid binary 1999 KW4.

“It’s the first planetary defense mission and will impact the moon of the near-Earth asteroid Didymos in 2022,” Thomas said.