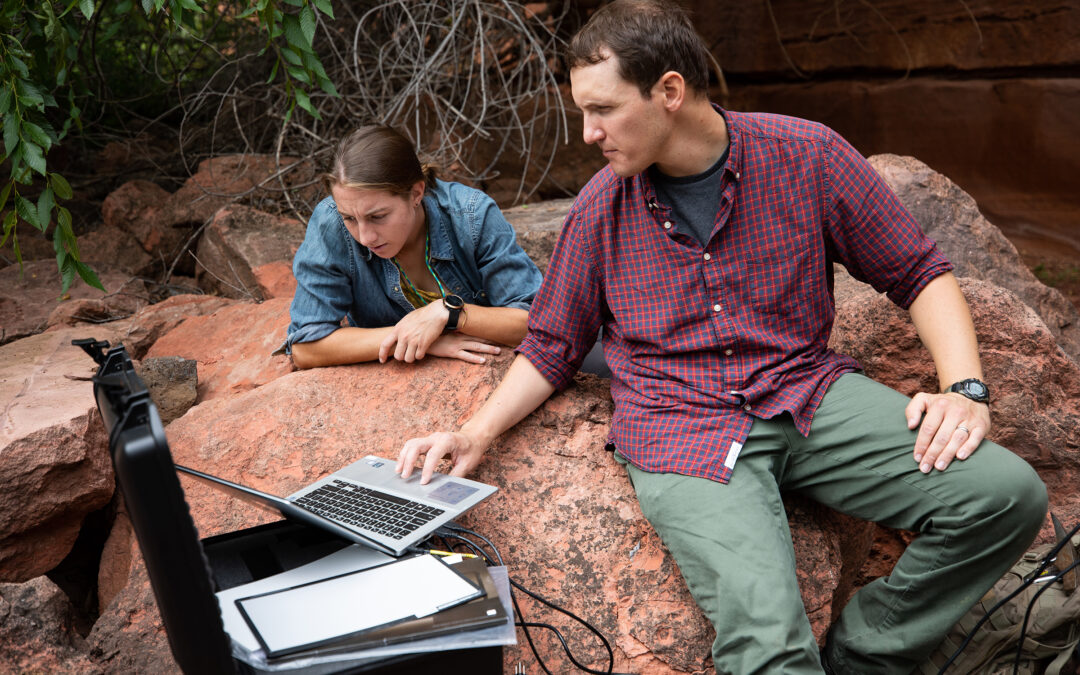 Scientists are creating ways to compile and interpret an abundance of high-resolution satellite images on a continental scale to better understand Antarctica, Arizona and the world.

The same sophisticated satellite imaging techniques being developed to map and identify the size and composition of uncharted land in Antarctica soon may help scientists produce finely detailed geologic maps of the Lower Colorado River Corridor and better understand its geologic history.

Mark Salvatore, an assistant professor in Northern Arizona University’s Department of Astronomy and Planetary Science, is leading a three-year project funded through a National Science Foundation (NSF) grant of more than $167,000 to develop a protocol to analyze a massive amount of data—more than 60,000 images—across the frozen landscape of Antarctica. This work is part of a larger collaborative project run through Stony Brook University in New York.

“Our research objective is to understand the biological, geological and hydrological functioning of the polar regions on a scale that has been beyond our reach until now, and to develop tools that can be applied globally,” Salvatore said. “The result of our work will be what we’re calling ICEBERG, or Imagery Cyberinfrastructure and Extensible Building-Blocks to Enhance Research in the Geosciences, a system for coupling open-source image analysis tools with the use of high-performance and distributed computing for imagery-enabled geoscience research.”

Ultimately, Salvatore aims to build the cyberinfrastructure required to make the most of satellite imagery for geosciences, starting with researchers working in polar areas, and then branching out to the larger non-polar community.

“This new imagery-computing superhighway that we’re creating will make it easier and far more efficient for scientists to study processes at much larger spatial scales than has been previously possible. Scientists who don’t have the background in remote sensing will be able to simply command a computer program to run calculations to locate a particular rock type, for example, or all the blue ice in Antarctica.”

Exploring the Colorado River by satellite

Another key element of the ICEBERG study is training undergraduate and graduate students in remote sensing technologies. Salvatore was recently awarded a $43,000 supplement from the NSF INTERN Program to support a related project to be carried out by NAU doctoral student Helen Eifert. Eifert, who’s been documenting polar rock types for ICEBERG, will intern with a U.S. Geological Survey (USGS) team in Flagstaff next semester, utilizing her satellite imaging interpretation skills to contribute to a USGS project entitled “Geologic Mapping of the Lower Colorado River System (LOCOS).”

The goal of the LOCOS project, which is funded by the National Cooperative Geologic Mapping Program (NCGMP), is to systematically map mostly surficial geology along the Colorado River corridor in western Arizona, and eastern Nevada and California. High-resolution multi-spectral satellite imagery that is available for the region will be processed to inform on the lithology of the surficial units using the ICEBERG protocols. Eifert will validate the remote sensing techniques used to read the satellite imagery on a large scale to provide new insights into the geology of the area, helping the USGS team in its ongoing efforts to geologically map this region. This work highlights the ongoing and growing relationship between NAU’s Department of Astronomy and Planetary Science and the USGS.

“Satellite imagery can be used to help identify the composition of large rock units and broad mineral trends,” Eifert said. “This understanding can help pick out the best sites for field mapping and prepare us for what we might see on the ground. My time in the field with the USGS,” she added, “will help with the validation of our interpretation methods on the ICEBERG project, which is especially useful since Antarctica is harder to get to!”

Near-real time datasets at the continental scale now within reach

“A lot is unknown about Antarctica,” Salvatore said. “We don’t even have a good grasp of how much land area is exposed on the continent, or even where ice is and where it’s not. Satellite imagery has been around for a while and we’ve used these spectral tools to understand the composition of planetary surfaces, but what’s new is our ability to use these at high volume and large scale, by working with cyberinfrastructure experts and computer scientists.”

Salvatore explains that in the past, scientists had to choose between high resolution and scale.

“With high resolution,” he said, “you can see smaller and smaller things, but oftentimes high resolution means you can only map a small area. For the first time we have the ability to automate these processes and take high resolution to scale. We can map car-sized objects across the entirety of Antarctica. No one was able to put the two together in the past.”

Salvatore says the dataset will be able to quickly spit out information about big science questions like, how much ice exists this year versus next year, and where glacial melt lakes are located. This is of particular interest to Salvatore as he searches for extremophiles—microscopic life that exists in harsh environments—near the South Pole and on other planets.

“Near-real time datasets of geological and biological importance at the continental scale are within our reach when we create those critical cyberinfrastructure components,” he said.

Meantime, Eifert’s involvement in global research and internship with the USGS supports NAU’s goal of encouraging young female scientists to pursue careers in their field of study, whether in academia, industry or government.

“This internship will be a great platform for launching my future pursuits in potential non-academic fields,” Eifert said.

Bonnie Stevens and Kerry Bennett | Office of the Vice President for Research
(928) 523-5556 | kerry.bennett@nau.edu