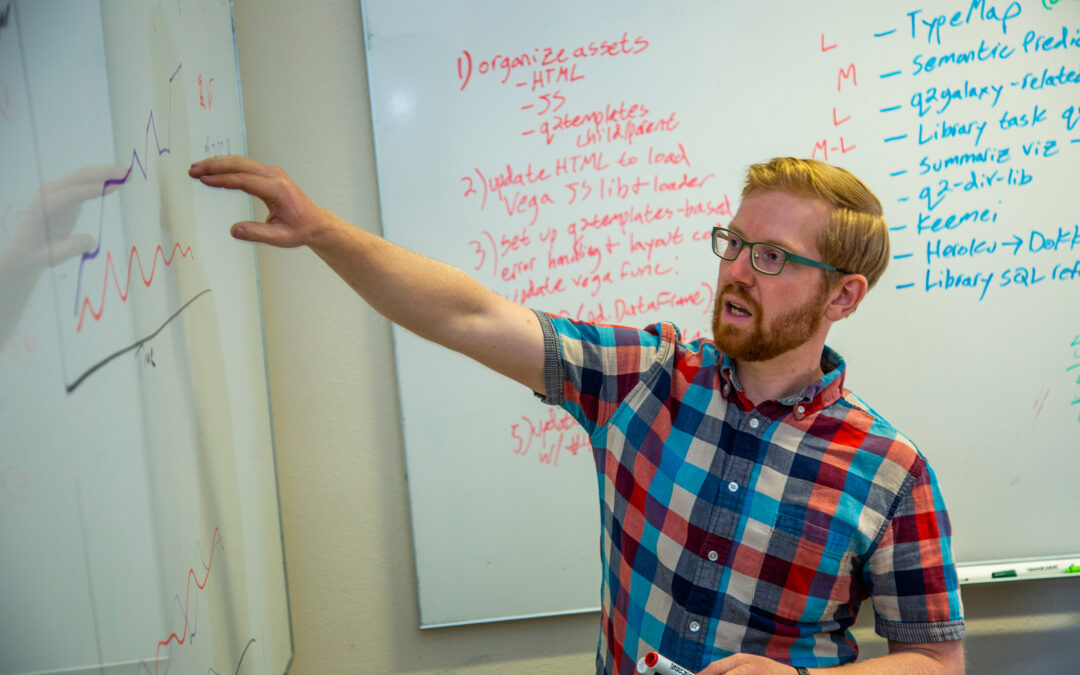 Chris Keefe is blending his passions for biology and computer science to help tackle the sixth leading cause of death in the United States—Alzheimer’s disease. To do that, he is using microbiome bioinformatics and computer software development to investigate the connections between the disease’s symptoms and the bacteria that live in the intestines of mice.

“We know that there are pretty strong connections between the gut microbial communities in mammals and the central nervous system’s behavior and health,” Keefe said. “And based on that, we’re essentially exploring whether the critters in our gut—or in the case of this specific study, in mouse models—are causing Alzheimer’s disease or exacerbating symptoms.”

Alzheimer’s disease is a type of dementia that causes problems with memory, thinking and behavior. There is no cure, but Keefe is part of a worldwide effort to find better ways to treat the devastating disease, delay its onset and even prevent it from developing.

The Alzheimer’s disease research being performed at PMI is currently funded by the Arizona Alzheimer’s Consortium, through a grant awarded to Caporaso and assistant professor Emily Cope. Keefe is working in close collaboration on this project with Emily Borsom, a PMI graduate student in Cope’s research group.

At age 34, Chris is a non-traditional student with wide-ranging interests. He holds a degree in English and is now double-majoring in computer science and biology, with a minor in mathematics. Last spring he was named a Goldwater Scholar, the most prestigious award in the United States for undergraduate students in science, technology, engineering and mathematics. His curiosity and enthusiasm for learning led him to his research.

“I kind of stumbled into all of this. I connected almost by chance with this really amazing laboratory led by associate professor Greg Caporaso at the Pathogen and Microbiome Institute (PMI). He and his team are just amazing mentors,” Chris said. “Finding a place where I can work on biological questions and try to understand more about the world through code is kind of a perfect synthesis of my interests.”

“Being able to work with those three people has been a real gift.”

The opportunity to do research, he said, has changed him in a lot of ways.

“It has given me both the encouragement and ability to recognize I can do much harder things than I thought were possible. There is actually a lot of pleasure in pursuing questions that are very difficult to answer and failing repeatedly and hilariously at them until you make some kind of breakthrough. And I think the other side of that is that no work moves forward without a community. The people that I’ve worked with here at NAU have all been really amazing partners in my learning experience, but also in making real things happen in the world.”

And making things happen is, in the end, Chris’ aspiration.

He said he plans to “continue doing development work, continue doing science research and most importantly to apply the skills and the knowledge that I have to doing some good for our planet, for our people and the communities that I interact with in the world I live in.”