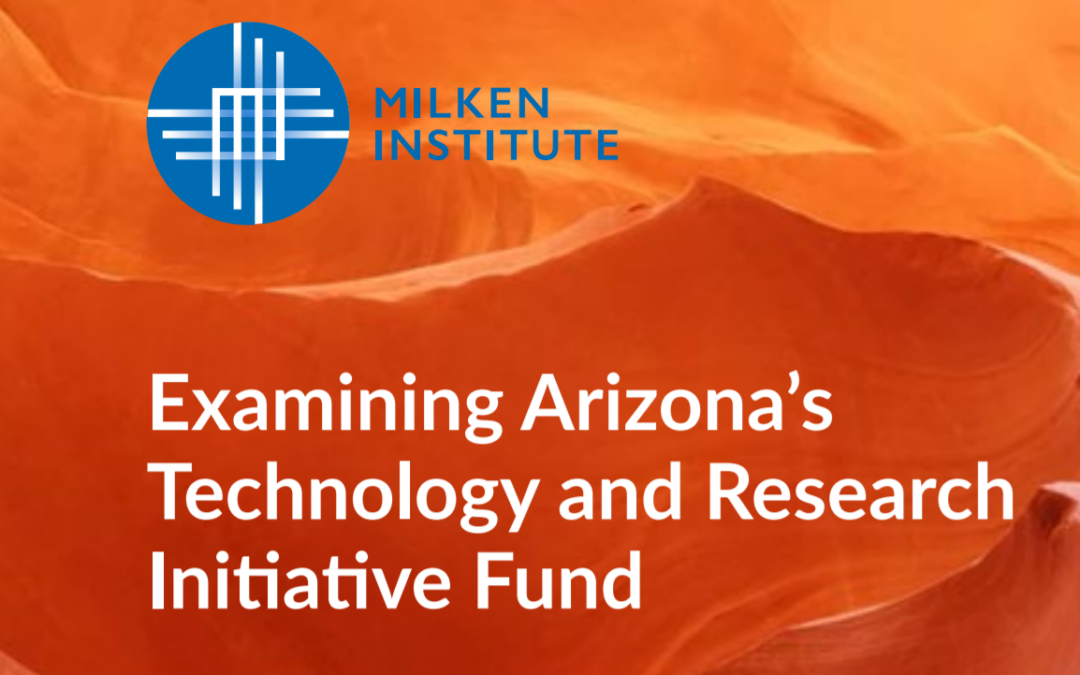 A new report commissioned by the Flinn Foundation reveals the Technology and Research Initiative Fund, or TRIF, led to a growth of startups, patents, and license income, the creation of new bioscience institutes, the retention and recruitment of faculty, as well as a growing return on investment.

The Milken Institute report released April 15, 2020 studied the impact of TRIF since it was approved by Arizona voters in 2000 as part of Proposition 301. More than $1.1 billion has been used for scientific research at Arizona’s three state universities.

The Milken Institute, a nonprofit, nonpartisan think tank, analyzed the impact of TRIF since it was approved by Arizona voters in 2000 as part of Proposition 301. Arizona State University, Northern Arizona University, and the University of Arizona have received 12% of the sales tax collections, $1.12 billion to date, for scientific research.

The report was commissioned by the Flinn Foundation.

The Flinn Foundation was established in 1965 by Dr. Robert S. and Irene P. Flinn to improve the quality of life in Arizona to benefit future generations. In addition to advancing the biosciences, the foundation supports the Flinn Scholarship, a merit-based college scholarship program, arts and culture, and the Flinn-Brown Fellowship civic leadership program.

Milken concluded that TRIF “laid the groundwork for developing a strong technology transfer and innovation infrastructure within Arizona” and that its existence today “is an essential component of Arizona’s innovation economy.” Arizona’s high-tech and life science GDP grew by 27.16% in the five years ending in 2018, and by 6.83% in 2018 alone, the report states.

The growth of startups, patents, and license income, the creation of new bioscience institutes, the retention and recruitment of faculty, as well as the growing return on investment, can also be attributed to TRIF, the report states. In 2019, an $83.6 million TRIF expenditure led to $433.6 million in additional investment.

Proposition 301, including TRIF, was renewed by the Arizona Legislature through 2041, but no longer has voter-approved protections.

ABOUT THE MILKEN INSTITUTE
The Milken Institute is a nonprofit, nonpartisan think tank. For the past three decades, the Milken Institute has served as a catalyst for practical, scalable solutions to global challenges by connecting human, financial, and educational resources to those who need them. Guided by a conviction that the best ideas, under-resourced, cannot succeed, we conduct research and analysis and convene top experts, innovators, and influencers from different backgrounds and competing viewpoints. We leverage this expertise and insight to construct programs and policy initiatives.

These activities are designed to help people build meaningful lives in which they can experience health and well-being, pursue effective education and gainful employment,
and access the resources required to create ever-expanding opportunities for themselves and their broader communities.

ABOUT THE CENTER FOR REGIONAL ECONOMICS
The Milken Institute Center for Regional Economics produces research, programs, and events designed to inform and activate innovative economic and policy solutions to
drive job creation and industry expansion.

Report and header image is notes as ©April 2020 Milken Institute.  This work is made available under the terms of the Creative Commons AttributionNonCommercialNoDerivs 3.0 Unported License, available at creativecommons.org/licenses/by-nc-nd/3.0/.