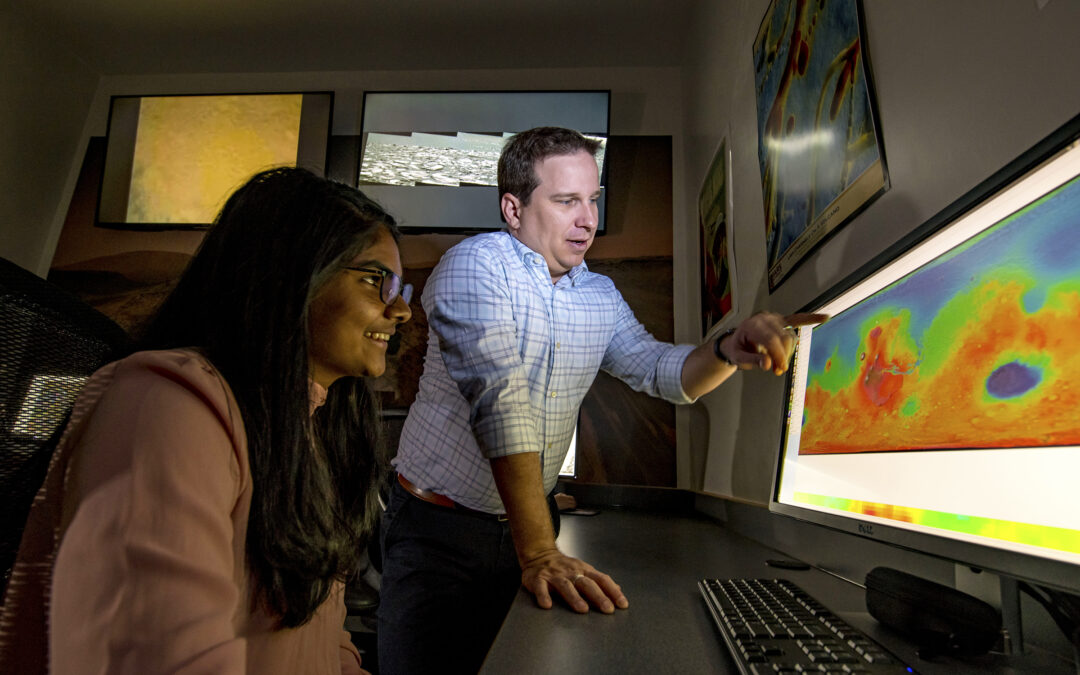 In anticipation of sending humans to Mars by 2033, NASA scientists are searching for suitable locations to land on the Red Planet. Ideally, these potential landing sites would have high scientific value for exploration while offering natural resources to sustain human life. Over the last 20 years, the community studying Mars has made significant progress mapping and characterizing reservoirs of ice.

In a new study published in Geophysical Research Letters, a team of scientists, including assistant professor Christopher Edwards and postdoctoral scholar Jennifer Buz of NAU’s Department of Astronomy and Planetary Science, map several locations on Mars at high and mid latitudes where water ice exists at a depth as little as an inch below the planet’s surface, which astronauts could dig up and process for drinking water and oxygen.

“Although previous studies have predicted ice near the surface of Mars,” said Buz, “our study represents a significant advance within the context of the planned exploration because we identified ice existing in very shallow depths that would be easily accessible and developed regional maps that provide continuous coverage as well as localized maps that can be used to select specific landing sites.”

“You wouldn’t need a backhoe to dig up this ice. You could use a shovel,” said the paper’s lead author, Sylvain Piqueux of NASA’s Jet Propulsion Laboratory. “We’re continuing to collect data on buried ice on Mars, zeroing in on the best places for astronauts to land.”

Because frozen water is a strong heat conductor, the scientists were able to use heat-sensitive instruments, the Mars Climate Sounder on board NASA’s Mars Reconnaissance Orbiter and the Thermal Emission Imaging System onboard the Mars Odyssey Orbiter, to create a “treasure map” of sorts that NASA can use to select the best landing locations for future explorers.

The team cross-referenced temperatures suggestive of ice with other data, such as reservoirs of ice detected by radar or seen after meteor impacts. Data from Odyssey’s Gamma Ray Spectrometer, which is tailor-made for mapping water ice deposits, were also useful.

“We show that water is present at locations where future landing is realistic,” Edwards said. “This ice could be exploited for drinking water, breathable oxygen and other uses at a much lower cost than if the mission’s crew brought it from Earth.

A planetary scientist, Edwards studies the surfaces of extraterrestrial planets using high-resolution imagery, thermal infrared radiometry and spectroscopy. He works with multiple NASA Mars missions, conducts planetary analog fieldwork and develops new remote sensing instruments for use in the laboratory, field and space-based applications. A participating scientist on NASA’s Mars Curiosity Rover project, Edwards is the director of NAU’s Planetary Instrumentation eXperimentation and Exploration Laboratory (PIXEL), where he teaches students to command the day-to-day activities of the Rover operating on the surface of Mars as well as develop new instruments and techniques for studying various planetary surfaces.

Postdoctoral scholar Jennifer Buz specializes in planetary surface characterization and the study of past and present magnetic fields on planetary bodies. Her work utilizes a variety of instruments, such as spectrometers on satellites orbiting Mars and cameras onboard the Curiosity Rover. She is currently studying dry lake environments on Earth for comparison to current and future paleolake missions on Mars. In the past, Buz has worked with extraterrestrial rocks including lunar samples brought back by Apollo astronauts and Martian meteorites found in Antarctic ice fields.