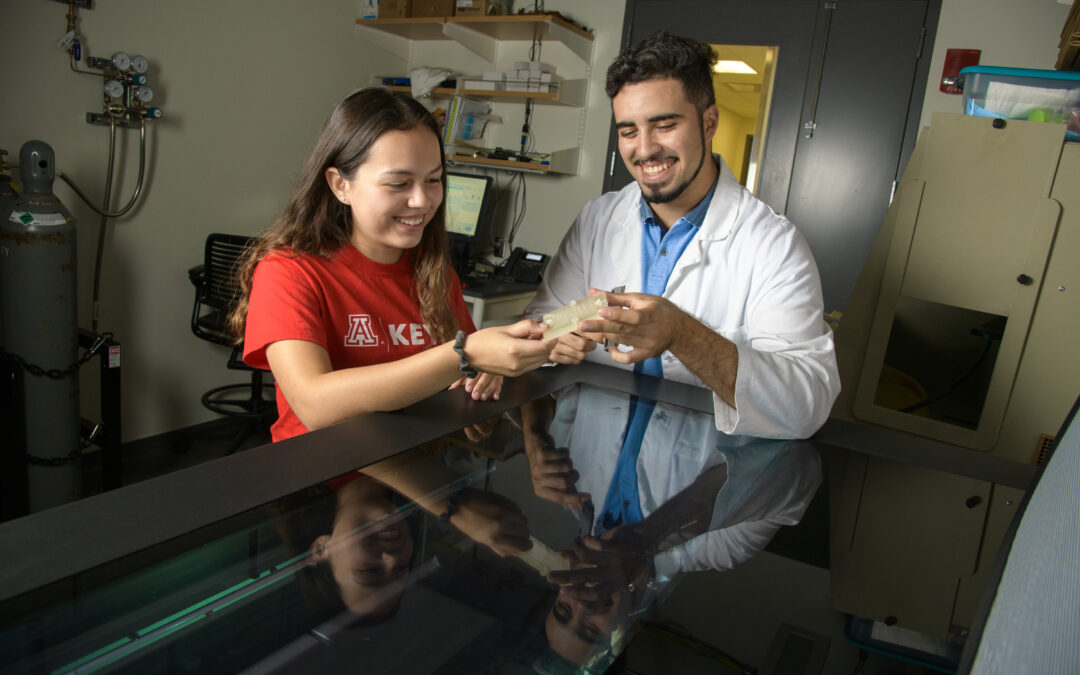 Ricky Cordova learned an invaluable lesson during his time as a KEYS intern that he now passes on to his own KEYS mentees.

Life often works in mysterious ways. Intangible forces can influence us without obvious rhyme or reason, but sometimes, they can bring us full circle to show us how much we have grown. This could not be more true for Ricky Cordova.

Early in his life, Cordova learned the key to success – a priceless lesson that would follow him throughout high school, college, and the start of his career. He has since committed himself to share the teachings of his experiences with others to not only change people’s lives but to change the world for the better.

As a high school freshman in 2011, Cordova was a driven young man who already knew a thing or two about setting goals. Aware of his growing passion for science and engineering, his mother informed him about a research internship which she thought might be the perfect summer opportunity for him to explore his interests – the KEYS Research Internship Program at the University of Arizona.

The KEYS Research Internship, led by the BIO5 Institute, is a unique and highly regarded internship for excelling high school students across Arizona. The seven-week intensive summer program allows students to work alongside research professionals in UArizona laboratories. Interns initially are trained on the basics of biotechnology and research. Then, they conduct research experiments selected from topics ranging across the biosciences, engineering, environmental health, and biostatistics. Each intern presents their findings to the public during a poster session after the program.

Though turned down in 2011 because he did not meet the age requirement, Cordova was accepted as a 2012 KEYS intern during his sophomore year at Ironwood Ridge High School. This feat was something to be proud of considering that sophomores only make up 9.4% of all students who have been accepted to the program and completed successfully.

Despite his age, Cordova’s KEYS experience proved to be beyond his wildest expectations. He was no longer “just” a high school student – he was a scientist.

Cordova was assigned to work in the lab of Dr. Urs Utzinger, a biomedical engineering laboratory, where he studied the use of quantum dots for the detection of colorectal cancer. While waiting for a shipment of research materials that were essential to his intended project, Cordova was assigned to work with various graduate students and research staff. This opportunity gave him unanticipated exposure to the variety of work the entire Utzinger lab was conducting, as opposed to solely focusing on his specific project.

Weeks of hands-on experience with multiple experiments allowed Cordova to gain skills like coding and working with electronics in a laboratory setting – skills he might not have gained without the delayed shipment of lab materials for his project. These diverse skills – along with his work ethic and adaptability – led to him being offered the opportunity to continue working in the Utzinger lab during his final two years of high school.

Cordova learned a lot during the seven weeks of his internship, but perhaps his greatest lesson occurred on the final day of the program at the research showcase. The big day had a bit of a rocky start. He was running late due to a minor wardrobe malfunction and had to make a quick stop to the local department store to pick up a new belt. Not only was he nervous about his belt fitting correctly, but he was presenting his research on a failed experiment.

Despite the content of his poster, he knew how he needed to present himself to give the best poster presentation possible. His warm smile, direct eye contact, and new-found confidence caught the attention of his first set of audience members as he began his rehearsed elevator speech.

Cordova saw astonishment and genuine interest as the practiced words left his mouth. He explained that the purpose of the experiment was to find an alternative form of detection of colorectal cancer and assist in the elimination of the deadly disease. As he spoke, he noticed the eyes of the guests light up with awe and hope. In that moment, Cordova became a scientist sharing knowledge gained from his work. The experience was a taste of his dream, only now he was living in it.

But the clouds slowly rolled over the sunlight he was basking in. Despite the fact the hypothesis was promising, and his method was still a viable detection tool, he had to break the news that his first attempt at the experiment did not work. He could visibly see the hope fade from the eyes of each successive person he explained his project to. He felt as if their vision of him went from being a scientist who was going to save thousands of people, back to a kid. Back to nothing more than a high school student. He felt as if he were an imposter.

But this all changed in the last few minutes of the poster session when a man approached his poster and asked to hear about his experience. After starting his practiced speech on his project, Cordova was cut off and asked five simple words by the then mysterious guest, “So what did you learn?”

Thrown off guard by this question, Ricky explained quite literally that he learned how to bio-conjugate antibodies to quantum dots and fluorescent particles to find certain things within tissue samples.

Once again, he was cut off by, “No, no, no…what did you really learn?”

Confused as to what answer this man was looking for, Cordova nervously looked around the room, with his glance finally settling on the words on his poster. At that moment, one section seemed to suddenly stand out from others, “Next Steps and Future Directions.”

Struck with an unexpected moment of inspiration and realization, Cordova looked at the man and replied, “I learned that failure is never an endpoint.”

Cordova has recalled that moment – and its corresponding lesson – many times since that day, like when he failed his first college midterm at Stanford. Despite all his accomplishments, similar disappointments made Cordova feel as if he was suffering from imposter syndrome. This is a phrase common to people in high positions of success, meaning you can be qualified for a position, yet due to pressures and comparisons to others around you, you may still feel inadequate and undeserving – a feeling that he first felt at the KEYS research showcase all those years ago when presenting on an experiment that did not work. A feeling that began to consume him.

These feelings continued to progress. In his junior year of college, Cordova was kept in bed by depression and anxiety, unable to go to class. He had been consumed and exhausted by feelings of inadequacy and self-doubt. He was at his lowest point in a mental cycle that seemed unending and relentless. These feelings were exacerbated at graduation when he received a “fake” diploma because he still had one more summer class to finish. After all his successes and the lesson learned during KEYS, he still felt like an imposter.

But this was not an endpoint. It was time to learn from his mistakes.

Stanford is an experience that is not for the fainthearted. Four years there had left Cordova sleep deprived and mentally exhausted, and he needed a break to allow himself to recover and heal. He was still unsure exactly of what his plans would be, but he knew that rest and recovery were necessary to re-center himself physically, mentally, and spiritually.

Through introspection and recalling the lessons he learned throughout his life, he reminded himself that “failure is a magnet for inspiration, and it’s an opportunity to be introspective, to self-reflect, and to learn.”

There was no better way to hone in on what he had learned as a KEYS intern than to come back home to Tucson, Arizona.

Today, Cordova has truly come full circle. Seven years after his own KEYS internship, he is a full-time research specialist in the UArizona Tissue Optics Laboratory. He engages in collaborative projects between the Department of Biomedical Engineering and the College of Optical Sciences under the direction of Dr. Jennifer Barton, director of the BIO5 Institute.

He also serves as a mentor to his own KEYS interns, sharing valuable lessons about turning failure – real or perceived – into success because realizing that failing does not make one a failure changed his life.

Cordova is proof that life can ultimately bring you full circle, back to a place where you have been before, just to show you how much you have grown.

The KEYS program is led by the BIO5 Institute and is funded by BIO5 and generous supporters including individuals, families, companies, foundations and various UArizona faculty, colleges and departments. The Technology and Research Initiative Fund (TRIF) that helped launch BIO5 almost 20 years ago continues to be a catalyst in enabling effective, cross-disciplinary bioscience research, innovation and impact at the University of Arizona, and also enables world-class student engagement programs like KEYS.