Paweł Łaniewski, Ph.D., and Melissa Herbst-Kralovetz, Ph.D., dip into their cell supply, which is stored at −80° Celsius.“

Unanswered questions swirl around the microbiome — habitats in our bodies that diverse species of bacteria call home. Scientists are only just starting to scratch the surface of how these bacteria interact with our unique body chemistries to influence our health. One of those scientists is Melissa Herbst-Kralovetz, Ph.D., associate professor of basic medical sciences and obstetrics/gynecology at the University of Arizona College of Medicine-Phoenix, director of the Women’s Health Microbiome Initiative, and member of the UArizona Cancer Center, who says the riddles posed by the vaginal microbiome captivated her early in her career.

At first, I wanted nothing to do with it, because it was too difficult to model,” recalled Dr. Herbst-Kralovetz, who is also a member of the BIO5 Institute. “Then you get hooked on it and you’re like, ‘I need to learn more!’ It’s really complex, but really fun, too.”

Today, from her lab on the Phoenix Biomedical Campus in downtown Phoenix, Dr. Herbst-Kralovetz leads a team of researchers who are working to better understand how to predict, prevent, and treat gynecologic cancers.

One of the microbiome’s many mysteries involves the single-celled version of the eternal question: What came first, the chicken or the egg? In the Herbst-Kralovetz Lab, that question is more like: What came first, cancer, or the bugs? It’s a deceptively complex question, and the answer can tell us if we can prevent certain types of cancer or simply predict them — and gets to the heart of one of the most important concepts in science: causation.

“Association versus causation is a major issue in the field,” Dr. Herbst-Kralovetz said. “These bacteria are in the specimens we collect, but the big question is, are they influencing carcinogenesis? Were they there the whole time or do they favor this new environment?”

Dr. Herbst-Kralovetz has conducted studies examining the vaginal microbiomes of women with and without cervical cancer — which is caused by a virus that is usually cleared by the immune system but can sometimes persist, leading to cancer. It turns out that “good” bacteria called lactobacilli are associated with cervical health, while “bad” bugs like Sneathia and other anaerobic bacteria are associated with the persistence of the viral infection and possibly the development of cervical cancer. Her lab has begun uncovering interesting associations between the vaginal microbiome and endometrial cancer related to pH. More optimal microbiomes are dominated by lactobacilli, which lower the vaginal pH by releasing lactic acid.

What came first, the cancer or the bugs? It’s a deceptively complex question, and the answer can tell us if we can prevent gynecologic cancer or simply predict it — and gets to the heart of one of the most important concepts in science: causation.

“Our studies are really preliminary right now, but we’ve seen a significant difference in the vaginal pH between women with and without endometrial cancer, which is a really low-tech way to look at the vaginal community,” Dr. Herbst-Kralovetz said. “When you have a depletion of lactobacilli, you have an overgrowth of these bad bacteria. Then you increase your pH.”

Her lab is conducting the largest study in history to investigate the connection between the vaginal microbiome and endometrial cancer. When the results are in, she hopes to shed light on whether any particular species of bacteria might be associated with the development of endometrial cancer.

“We’ve really tried to make our studies stand apart from others. Right now, we have 200 specimens. Other studies have collected 30 or 40 samples,” Dr. Herbst-Kralovetz said. “It’s taking time because I wanted to be thorough.”

Bustling with activity, the Herbst-Kralovetz Lab is focused on solving complex problems in women’s health.“If these bacteria are drivers of carcinogenesis, blocking them would make sense,” Dr. Herbst-Kralovetz said. “Figuring out how to reinstate beneficial bacteria also would be really important.”

Dr. Herbst-Kralovetz talks of cancer progression as a journey with a beginning and an end. We don’t know if the “bad” cancer-associated bacteria are along for the ride — or if they’re in the driver’s seat on the road to cancer. If Sneathia or another bug is shown to be behind the wheel, potential therapeutic interventions could be developed to target cancer early — and force a U-turn. Scientists also would be able to devise powerful new strategies for cancer prevention by figuring out how to kill the bad bugs and replace them with beneficial bugs.

But if the so-called bad bugs are in the passenger’s seat, they might just be sitting there quietly, hoping to get to their destination: a cancerous environment where they can thrive. Once they get there, they might proliferate wildly, obscuring the actual drivers from view. If a bug is a passenger rather than a driver, targeting it for destruction wouldn’t help — but its presence could be a sign that the body is on the road to cancer.

“Using them as a potential biomarker could give us an early prediction of cancer,” Dr. Herbst-Kralovetz said. “We could intervene before cancer occurs.” 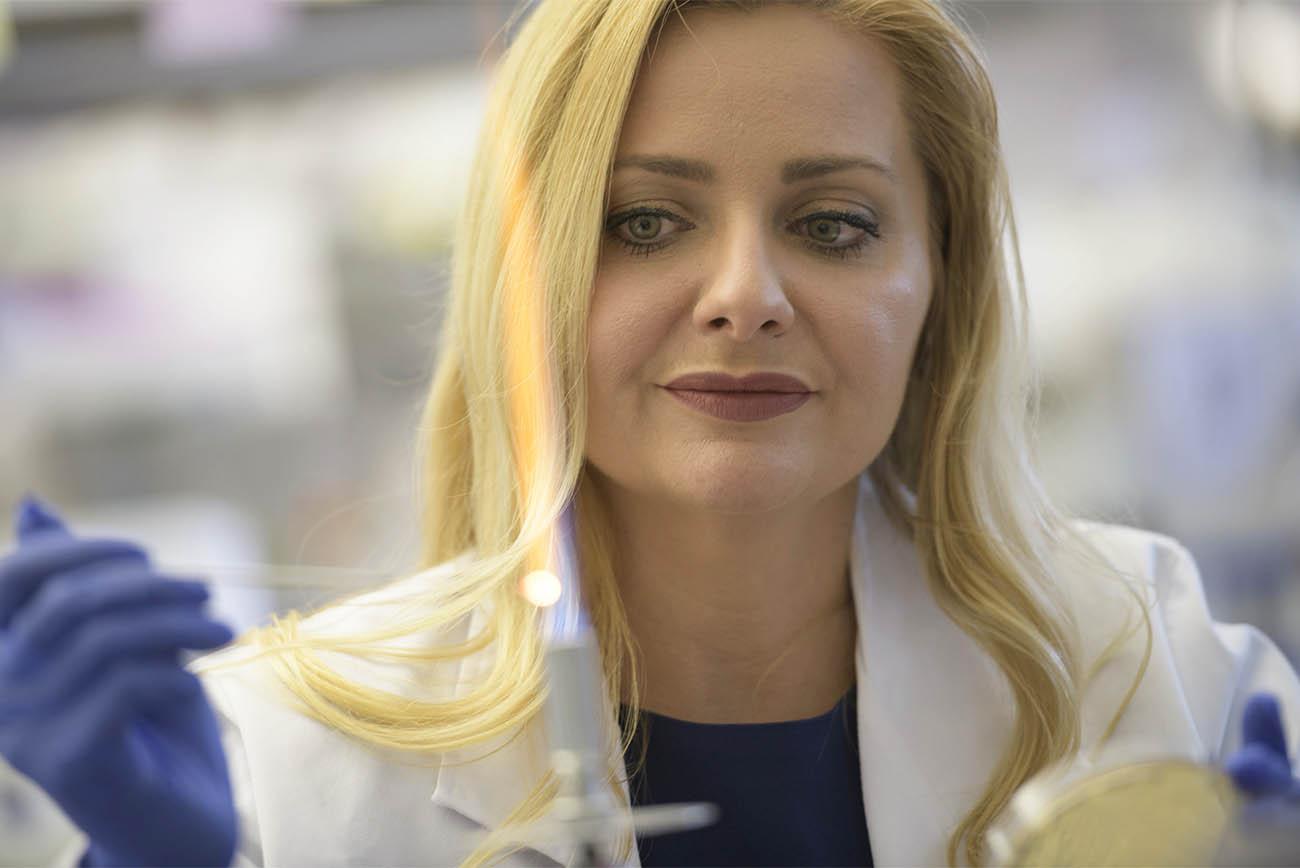 To prevent contamination with other bacteria, Dr. Herbst-Kralovetz sterilizes her tools with an open gas flame.

Once someone has cancer, however, it’s too late to prevent or predict it. But even at this point, solving the mysteries of the microbiome can still help improve survival and quality of life.

Immunotherapy, a cancer treatment that trains the immune system to attack cancer cells, might be affected by the composition of the vaginal microbiome. Studies of the gut microbiome show that patients who respond to immunotherapy have different populations of bacteria, which might be boosting the treatment’s effectiveness — and experiments in mice show that a fecal transplant from a responder to a non-responder can enhance the transplant recipient’s response to immunotherapy. But those studies are in the gut, not the vagina, and in mice, not humans. Scientists are a long way from figuring out if altering the vaginal microbiome might work hand in hand with immunotherapy to defeat cancer.

There also is compelling evidence that radiation and chemotherapy can throw the microbiome out of balance — and that an off-kilter microbiome somehow interferes with these treatments, making them less effective and more toxic.

“We think these therapies probably alter the vaginal microenvironment, especially if you’re getting pelvic radiation for gynecologic cancer,” Dr. Herbst-Kralovetz said. “But we don’t have any data yet.”

That lack of data means that, so far, there isn’t a recipe to create synthetic microbial cocktails of “good” bacteria that might boost cancer treatments’ effectiveness and blunt their negative side effects.

It can take a lifetime to untangle even one of the connections between myriad species of vaginal bacteria, several types of gynecologic cancer, and countless other variables. Dr. Herbst-Kralovetz says she is up to the task because for her, this riddle isn’t just a mesmerizing brainteaser — the answers she finds will benefit anyone at risk for gynecologic cancer.